I have problem with some sensors on NetBotz 200 / 150. Sometimes the temperature falls down to 0 and came up after some minutes without raseons. Any idea? 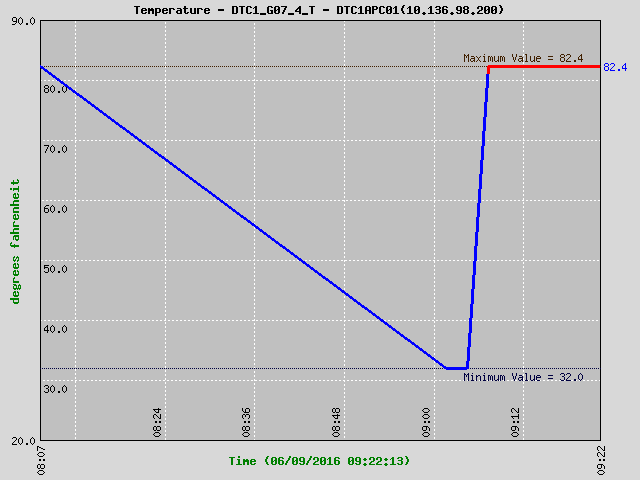 If this is happening to one sensor, I would suggest swapping the sensor to another unit or potential another port. If the issue follows the sensor, it sounds like an issue with the sensor.

Is the issue actually happening on a NetBotz 200. The graph however appears to be either a different type of NetBotz appliance (3xx,4xx,5xx) or from a DCE server.If this is being seen in DCE, have you checked the device directly? Is the issue only being seen in DCE? That could be a comms issue.

no the problem is on many sensors connected on Netbotz 200 and Netbotz 150.
The 0 values are also in the netbotz log not only in DCE.

Hi Rocchino, If all the sensors are doing it, I would disconnect everything and reset the 200 to defaults. Connect sensors to the main unit. If they're working, then one by one connect the 150s and their sensors. Potentially one of the pods, sensors, or cables is causing this issue. Otherwise, it would appear to be the unit. Steve

Hello Steve, I did some test. I have switched 2 sensors (one with error and one ok) from Netbotz 150 and Netbotz 200. The problem is the same. I think it's a sensor problem... I will try your option (remove, rebot) Tks and best regards Rocchino