Back to Building Automation Knowledge Base
Options
0 Likes
3353 Views
Trying to translate this page to your language?
Select your language from the translate dropdown in the upper right.

The Sigma Client reports a "HTTP connection failed" error" when an attempt is made to start it.

When the Sigma Client is started, attempts are made to make a connection to the Sigma Server, this connection fails and the Client cannot be started.

There are a number of reasons why this error might occur, suggestions are listed below.

1.  Windows XP operating system - ensure that service pack 3 has been installed, and that all the Windows updates have been applied.

2. Windows 7 operating system - only Ultimate and Professional are supported.

3. Sigma Client/Server software must be installed by a Windows user with "Admin" privileges.

4. Windows Firewall must either have been switched off, or has "Exceptions" configured as explained in the Sigma 4.05 SP1 release note.

5. Check that the "SigmaSVR" service has been started. If this service cannot be seen, then this is an indication that the Sigma software has not been install by an "Admin" user, and the software must be reinstalled.

6. Corruption of the Windows "User" files has taken place. Create a new Windows user with "Admin" privileges. Log on to Windows as the new user and test the Sigma Client again.

7. If using a VMware image try rebooting the image.

8. SMART is being used and has a modem connected to the PC for uploading data. Ensure that the modem is fully functional. If not, the HTTP error can be caused. This was seen at Sigma: R4   Release 3.44.14. and Smart Task Manager  3.0.2.20.

9. This may be because a proxy server is being used, eg on school networks. Log on to your PC computer with an administrator account. Open the "Start" menu and click on "Control Panel." Double-click on the icon labeled "Internet Options." Go to the "Connections" tab at the top of the window and then click on "LAN Settings." Make sure the box next to "Bypass proxy server for local addresses" is checked. Hit "OK" twice to confirm the new proxy port settings. 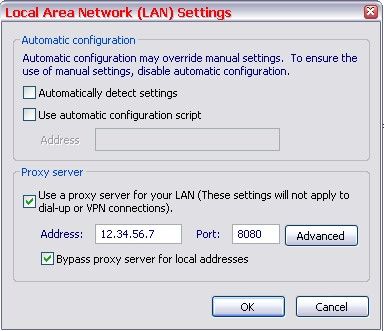 Make sure the box next to "Bypass proxy server for local addresses" is checked.
Hit "OK" twice to confirm the new proxy port settings.

10. This issue was reported from a School where Sigma 4.05 SP1 had been operating correctly for several weeks. The issue was traced to the Anti-virus software Sophos, which had received an update prior to the failure. Sophos had quarantined two Sigma dll files. To correct this issue both Sophos and Sigma were uninstalled. A later version of Sophos was installed, and then Sigma was reinstalled, this corrected the problem.

11 - Sigma software installed when connected to a wireless network.

The Sigma client will only connect to the server when the wireless connection is made. Uninstall Sigma, disable the wireless, enable the network card, and then reinstall the Sigma software.

12. DELL PC, with firewalls and antivirus disabled and no wireless card fitted. There may be a service or an application running in the background as part of the vendors Windows platform makeup.Restore the same version of Windows, but without (where possible) any of the Vendors applications. Re-install Sigma.

15. The SBO PCS (StruxureWare Building Operation Project Configuration Server) also uses port 8080.This needs to be stopped or will conflict with Sigma and produce the HTTP error.

16. Make sure any data is backed up from the installed Sigma system.
Uninstall Sigma using Add/remove programs (Win XP) or Programs and features (Win 7).
Wait for the Sigma un-install process has completely finish.
Delete or rename the C:\Sigma folder to.......for example Sigma1.
Re-install Sigma by using a right mouse click on the "SigmaSetup.exe" file and select

A new clean Sigma folder will be created during the install.
Once completed reboot the computer.
Check the SIgma server is running and run up SIgma.

18. On SE laptops, the McAfee firewall has been updated:

This will provide a 1 hour window to run Sigma, in the McAfee pop up window. add a reason e.g. Sigma.