Error -25: License server system does not support this version of this feature.

Back to Building Automation Knowledge Base
Options
0 Likes
1174 Views
Trying to translate this page to your language?
Select your language from the translate dropdown in the upper right.

Error -25: License server system does not support this version of this feature.

While trying to login to either WorkStation or WebStation, or during the startup of the Enterprise Server, an error "Error -25: License server system does not support this version of this feature." appears. 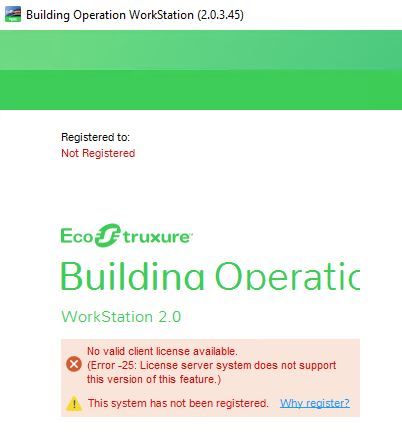 The activated license is not at an appropriate version for the corresponding software. The licenses activated in the EBO License Administrator need to be at a version greater than or equal to the version of the Building Operation software being used.

1. Workstation - If the Workstation license activated in License Administrator is at Version 1, this license will need to be upgraded to be compatible for any system EBO 2.0 and beyond.

To do this, simply notate the Entitlement ID and then return the Workstation License. Once returned, reactivate the license from the previously recorded Entitlement ID. This will upgrade the 1.X License to be used with newer systems.

2. Enterprise Server - If the error is received on an ES, verify that all ES licenses are in place. If the system was upgraded, it is necessary for all previous versions of ES/AS licenses to remain activated in the License Administrator.

Labels (1)
Labels:
Tags (1)
Was this article helpful? Yes No
No ratings
Share