Back to Building Automation Knowledge Base
Options
0 Likes
9435 Views
Trying to translate this page to your language?
Select your language from the translate dropdown in the upper right.

StruxureWare Building Operation site with any of the following: AS, ES, Reports Server

Sending notifications to Gmail, Yahoo mail, Hotmail, or other outside email account.

Wanting to use other SMTP than Schneider Electric E-mail Server:
if wanting to setup an ES or AS to send email notifications with third party SMTP, an Exchange server using port 25 supports the notifications.

In release 1.7.1 and earlier though Gmail, for example, suggests port 465 and 587, the workstations alarms that the email can not be sent since it cannot connect to email server. The problem is with the Gmail-account and often other 3rd party email providers both public and private, Google requires that you connect with SSL, which have been missing in the requirements and therefore these releases do not have this functionality.

In Email Notification put the 3rd party email address such as yourname@mailprovider.com. AS and ES will use the Schneider Electric SMTP server or the POP server of your choice to send the email notification. For multiple emails, check Multiple Email Addresses for Email Notifications or Alarm Recipients. Sometimes the mail is put in the Spam folder for the recipient. Check there and change settings to Not Spam.

Installing a valid SSL certificate for the Enterprise Server to allow SSL operation is not planned in a future version. Currently, the default certificate does not identify the system and is not trusted, but nevertheless enables SSL operation.

Wanting to use SMTP other than Schneider Electric E-mail Server:

An Exchange server or SMTP server which supports POP and uses port 25 supports AS and ES Notifications. Other servers which would require the setting of Primary/Secondary E-mail server fails to login to SMTP Server require an encrypted (SSL/TLS) connection which is not supported in Struxureware Building Operation versions up to and including 1.7.1. A solution is to use an SMTP proxy on the ES or another computer on the network that will handle the TLS/SSL authentication.

Using SmtpProxy on an Enterprise Server

SmtpProxy is a small freeware application that listens on a port you choose; the default port is 25. When SmtpProxy detects a connection on this port, it does the following:

SmptProxy runs as a Windows service so it can be installed on a LAN server and used by multiple devices such as AS. Note that SmtpProxy does NOT login to the SMTP server but rather credentials are passed through from the ES or AS.

Note: SmtpProxy is a third party application and therefore no support is provided by Schneider Electric.

SMTPProxy can be downloaded from http://smtpproxy.codeplex.com/ The download is a Windows Installer (MSI) file that can be used to install SmtpProxy on any machine that supports the .NET Framework v4 – Client Profile.

The following items can be configured with SmtpProxy’s config file:

Scroll to the end of the config file and locate the section SmtpProxy.Properties.Settings section and find the string mail.live.com

Edit this to smtp.gmail.com

After modification, you must restart the Smtp Proxy service from the services control panel for the new settings to take effect. 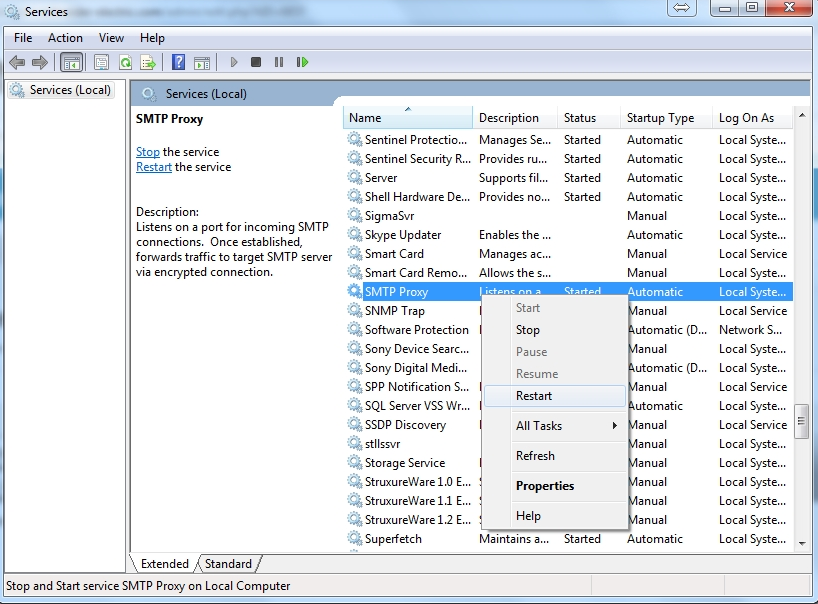 Configuring ES to use SmtpProxy 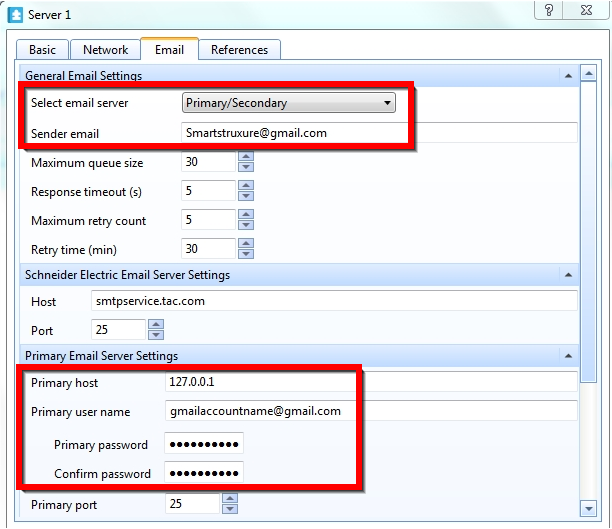