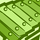 Hi there! I have an APC Back-UPS XS-1000 that's pretty snazzy. I'd like to give to more time offline in case power goes out. My idea was to splice in at the battery terminals some 10 gauge wire and create a connector on the side of the APC unit for external battery input, include a fuse in case of problems, and hook up a 24v battery bank to the APC. I've done some research so far on the topic, and although APC swearing up and down you can't do it for liability purposes, I'm hearing that it's very possible.

My main question was how the estimated run time is calculated, and whether adding additional Ah to the battery would throw it off. It sounds to me like the state of charge is estimated on the fly using voltage dependent algorithms, not hard coded into the charger.

The other thing that occurred to me is that charging double capacity batteries could take a while with an 18w onboard charger. Can it handle charging, say, 20Ah? I know it would be slow as ever, but I don't really see any problems here? Can anyone give some insight as to whether the charger may be able to handle it?

Again, I know this isn't a supported thing to do, but seems feasible given knowledge about internal operating components.