a customer have a Raritan PX3-1493V Pdu. Main Pdu Master can manage other pdus attached as slave. so only 1 Ip for all Rpdu (max 16 Pdu)

How can we configure this structure inside DCE? 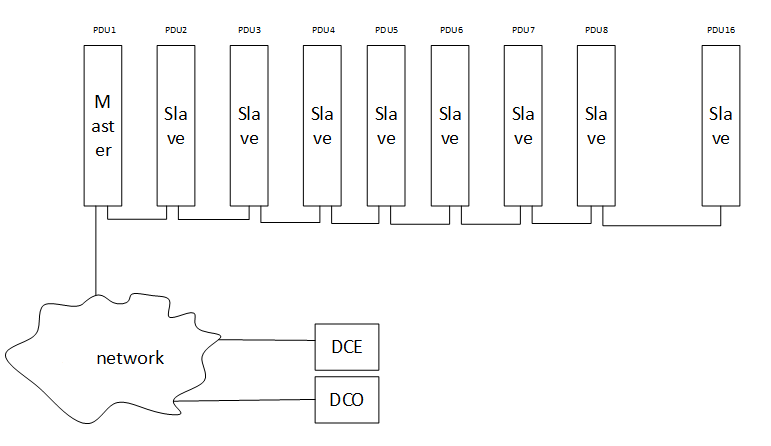 Another very surprising fact is that on the above mentioned screenshot, RARITAN PX3-1493V for some reason is Battery Manager, not rPDU. I believe that this is an annoying mistake?..

Therefore, let's hope that DDF-developers implement the Master-Slave scheme in the new DDF-file, which you wrote about. This, for example, has already been implemented in a new DDF-file for native Schneider Electric rPDU, starting with DCE-7.4.3 (see my post on this in ).

How can we configure this structure inside DCE?

Everything is very simple, as you can see from the my screenshot from the post I mentioned, all the rPDUs connected in this way will be displayed in the DCE-server as one device with one IP address. But in this one device, there will be several devices, each with its own number, for example, Device1 - Master, Device2 - Slave1, Device3 - Slave2, etc.

The above DDF-file I mentioned is used exclusively for native Schneider Electric devices. This DDF-file is default in DCE-7.4.3. But this DDF-file is not suitable for monitoring the Raritan devices, and in particular the PX3-1493V rPDU.

I repeat: the DDF-file for the Raritan PX3-1493V rPDU is in development and is not yet available. You need to wait...

do you know approximately when this DDF file will be available? In order to manage the relationtionship with the customer it's important to give them a rough date.

I do not have this information, so I hope that the staff here from the DDF team will answer your question.

Hi, I need to know a rough date in which the DDF file may be available. We are talking about 1 week, 1 month or more...let me know. Is it possible to have a contact into the DDF team?

At the current time, your question if this structure can be configured in DCE the answer is no.
Device support team will at some point start working on getting this to be possible in the new IT expert (https://se-dmaas.com/products/ecostruxure-it-expert/).

is it supported on new release of DCE?

I can't speak towards the DDF development for DCE version, but I am working on support for StruxureOn Gateway. I was wondering if you could possibly supply a walk file for this master/slave configuration?

Did you attach a walk file? I was able to get the MIB, but I also see "[attachment deducted]" and wasn't sure if you had attached one and I can't see it?

Could you use this utility to supply a walk file:

A walk file would be greatly appreciated to see what information we can get from the device and see what it is doing in this configuration.

I was wondering if the customer was able to supply a walk file to you?

no. customer sent me only the files that I have shared previously.

Is there any way you could get that walk utility I linked to them so they can supply an snmp walk? I'm working on a request for a customer myself and they have many of the PX2 Raritan RPDU's, but none of them appear to be chained as described above. The DDF I have now supports single RPDU's and appears to be working, but I have no idea how this will behave with a device that is chained as described (multiple devices with a single IP).