While opening Struxureware Central 7.0, I'm receiving an error "An error has occurred. see the log file". Attached are screenshot of the error and the log file. Please advise how to resolve this issue. 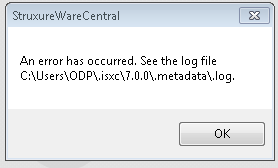 I can't provide any real detail but there are a number of timeouts and a lot of it appears to be performance based. It could be the server or it could have something to do with connectivity between the server and client. If you're using HTTPS, try standard HTTP.

I'd suggest installing the client on another system. If you're not on the same subnet, test the other client install on the same subnet as DCE. Please note that 7.0 is quite old and you should probably look into upgrading as 7.0 is no longer officially supported.

I also see some graphing issues. If you don't have the devices you may want to remove them from any saved reports.

You may also want to look for any Java or Eclipse conflicts. If you've installed or upgraded anything around the time this issue began, perhaps that is the cause.

The update of DCE is in line and will soon happen but before that I want to get access to 7.0 and take a back up.

Note that I'm receiving alert notifications on my email, I think the server is working fine and client is having an issue. Nothing was upgraded and/or changed in the system. Can I simply uninstall the existing client and reinstall it?

You can absolutely try uninstalling the client and before you reinstall, make sure to delete (or at least move) the C:\users \<your user>\.isxc folder as there's a lot of client data there as well. I think the better test would be as I mentioned, another client, specifically on the same subnet as DCE to rule out networking as well as your computer as being part of the issue.If it's intermittent, maybe reboot the server to see if it changes anything.

I installed a fresh copy in my laptop then through VPN I get connected with the same network of DCIM. I was able to open Struxureware Application and extract reports. But after closing the application when I tried to open it again I receive the same error. please advise what should be done now to resolve it.

if you’re using VPN, it’s not really local. I have seen strange things with VPN and suggest not using it at least for these tests.

As for the system working fine until you restart the client, the only times I have seen that happen is what a user profile is stored on a network or copied between local and network. If you again delete the .isxc folder and it works fine, reboot and it happens again, I think it may be something like this. Again installing on another system like a fresh windows install using a local admin account may yield different results.

Either way, it seems like something specific to the windows user or system at that point